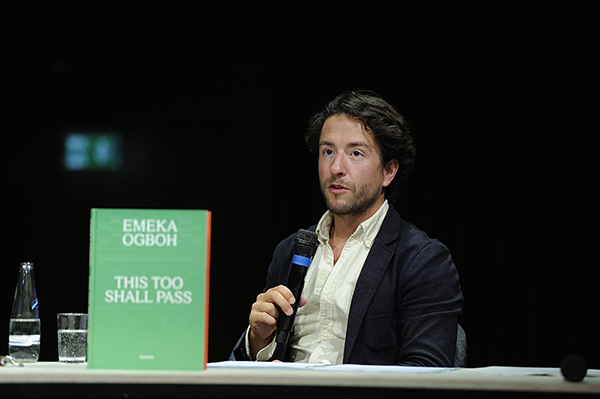 Jonas Tinius is a sociocultural anthropologist, whose fieldwork in Germany, France, and Italy focuses on the frictions between art, migration, public institutions, and difficult heritage. He has conducted research with artists, activists, curators, and policy makers, focusing on the ways in which cultural producers grapple with and bring about social and political transformations. His work analyses how cultural institutions (especially theatres, museums, and art spaces) act as public theorisers and reflexive prisms for fundamental societal issues, ranging from migration to restitution and repair. He works collaboratively and with a view towards creating platforms for public anthropological research and commitment.

Following studies in Archaeology and Anthropology, he completed his PhD in Social Anthropology at the University of Cambridge (UK), for which he accompanied a migrant-situated public theatre in the postindustrial Ruhr region of Germany, focusing on negotiations of asylum, immigration, and urban rejuvenation. A monograph from this work is forthcoming with Cambridge University Press (August 2023). He subsequently joined the Department of European Ethnology at the Humboldt-Universität zu Berlin, where he conducted research as part of a multi-researcher project on museums and diversity, situated in the Centre for Anthropological Research on Museums and Heritage (CARMAH) with funding from the Alexander von Humboldt foundation. As part of this work, he collaborated with curators and artists, studying the development of curatorial narratives set against the backdrop of the city’s nascent and contested heritage and museum project, the Humboldt Forum in the Berlin Castle. Since 2020, he is postdoctoral researcher in cultural anthropology and scientific coordinator of the European Research Council consolidator project Minor Universality. Narrative World Production After Western Universalism (PI: Markus Messling, Saarland University). In this role, he coordinated and curated the artistic residency and the exhibition project The Pregnant Oyster – Doubts on Universalism at Berlin’s Haus der Kulturen der Welt (House of World Cultures).

At present, Jonas is completing a book manuscript entitled Minor Curating. Art and Anthropology After the World Museum, which draws on fieldwork conducted with activists, artists, and curators since 2016 in Berlin, Milan, and Marseille. This book addresses possible modalities of curatorial production, which go beyond dominant narratives of world produced through public cultural heritage institutions, such as world museums.

During the Winter Quarter 2023 at UCLA’s Department of World Arts and Cultures/Dance, Tinius co-teaches, with Prof Alex Ungprateeb Flynn, the classes Introduction to Field-Based Research Methods and Curating Cultures.

Read more about Jonas at www.jonastinius.com